This is the best preserved Romanesque parish church in Scotland according to Professor John R Hume, though the nave was replaced in the nineteenth century.

It displays remarkable exterior decoration in the form of blind arcading while inside chevron decorated arches draw the eye to the apse and beyond.

Many mason’s marks can be seen, of which several are identical to some in Durham cathedral.

Distinctive corbels of human and animal form are found inside the apse and in a course outside the chancel.

Pilgrims passed this way going to St Andrews to worship at the shrine kept there to Scotland’s patron saint, pausing, no doubt, at the hostel in Guardbridge built for their shelter on the journey.

Notable memorials are to Robert Carnegie, ambassador for Mary of Guise and her daughter, Mary Queen of Scots. He died in 1565 in Leuchars castle. Also commemorated is Sir William Bruce who began the building of Earlshall castle nearby. His beautifully carved stone bears both Latin and Scots inscriptions. Having fought at Flodden in his youth, he died aged 98 in 1584. 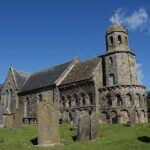 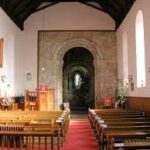 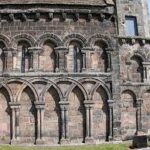